The endogenic and exogenic forces causing physical and chemical changes on the earth‘s surface are known
as geomorphic processes.

Geomorphic =relating to the form of the landscape and other natural features of the earth’s surface.

Geomorphic movements: large scale physical and chemical changes that take place on the earth’s surface due to geomorphic processes. 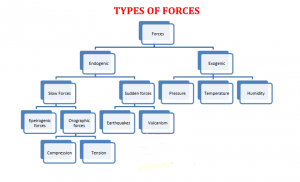 Endogenic forces are the internal forces that are responsible for the formation of new undulations on the surface of the earth. Since they create new landforms they are also known as the Forces of Construction.

They are the result of the convectional currents formed in the mantle. The source of this heat is the primordial heat of the interior and the radioactive decay of elements.

They can be broadly classified into slow forces and sudden forces.

Slow forces are of two types – Epierogenic and Orographic.

These forces act vertically and leads to up warping and down warping of the continents i.e. a large continental mass is pushed upwards and downwards. They are extremely slow forces. The landforms created by them are called Primary reliefs.

These forces are mountain building forces. They act horizontally (Compression and tension) and causes folding faulting and Vulcanism. The landforms created by these forces are called secondary reliefs. There are three types of mountains found on earth on the basis of formations, Fold Mountains, Block Mountains, and Volcanic Mountains. Where these features are found and how have they formed can be explained with the help of plate tectonic theory which has already been discussed. The individual processes of folding, faulting, and volcanism are discussed in the next section of this module.

These are the external forces that degrade the existing landforms. As the role of endogenetic forces is to create new undulations, the role of exogenic forces is to remove them and make the surface planar. Three factors act simultaneously – pressure, temperature, and humidity to break the uplifted areas and fill the low lying areas. The landforms created by them are called tertiary reliefs. Endogenetic and Exogenetic forces keep working together to maintain the equilibrium.

Exogenic forces are responsible for three types of processes: