Latitudes and Longitudes are imaginary lines used to determine the location of a place on earth.

Earth is slightly flattened at the North and the South Poles and bulge in the middle – lending it a geoid shape.

A needle is fixed through the globe in a tilted manner (called its axis). Two points on the globe through which the needle passes are two poles – the North Pole and the South Pole

All parallel circles from the equator up to the poles.

Latitudes are measured in- Degrees 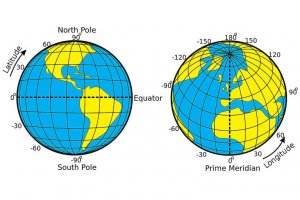 Used to find out how far east or west these places are from a given line of reference running from the North Pole to the South Pole. These lines of references are called the meridians of longitude.

Distances between them are measured in ‘degrees of longitude’; each degree is further divided into minutes, and minutes into seconds.

They are semi-circles and the distance between them decreases steadily polewards until it becomes zero at the poles, where all the meridians meet.

Unlike parallels of latitude, all meridians are of equal length and therefore, it was difficult to number the meridians- Decision to begin from the meridian which passed through Greenwich, where the British Royal Observatory is located-Prime Meridian.

Best means to measure time: By observing the movement of the earth, the moon, and the planets 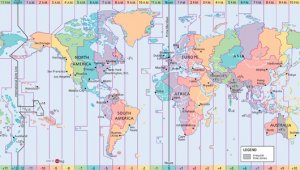 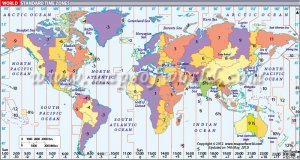 Get detailed Article on Latitudes and Longitudes: Click Here