Hey Dosto, In this article of Geomorphology you will read about seismic waves and earth’s interior. Before reading this article, you have to read Lecture-5 and Lecture-6 for better understanding.

So, Let’s dive into the topic.

As we have discussed in our previous articles the Study of seismic waves provides a complete picture of the layered interior.

An earthquake in simple words is shaking of the earth. It caused due to the release of energy, which generates waves that travel in all directions.

Now, first of all, You should understand Why does the earth shake?

Now, you will tell me in the comment section, which waves are useful to understand the study of the earth’s interior?

All-natural earthquakes take place in the lithosphere (depth up to 200 km from the surface of the earth).

An instrument called ‘seismograph’ records the waves reaching the surface.

Body waves are generated due to the release of energy at the focus and move in all directions traveling through the body of the earth. Hence, the name body waves.

The body waves interact with the surface rocks and generate a new set of waves called surface waves. These waves move along the surface.

There are two types of body waves. They are called P and S-waves. 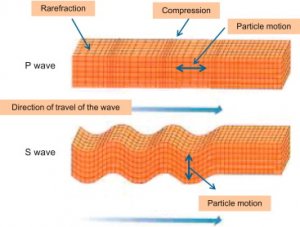 The behavior of Earthquake Waves

The n velocity and direction of the earthquake waves undergo changes when the medium through which they are traveling changes.

When an earthquake or underground nuclear test sends shock waves through the Earth, the cooler areas, which generally are rigid, transmit these waves at a higher velocity than the hotter areas. 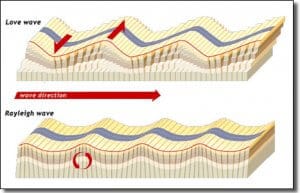 Different types of earthquake waves travel in different manners. As they move or propagate, they cause vibration in the body of the rocks through which they pass.

As a result, it creates density differences in the material leading to stretching and squeezing of the material.

The other two waves vibrate perpendicular to the direction of propagation.

The direction of vibrations of S-waves is perpendicular to the wave direction in the vertical plane. Hence, they create s troughs and crests in the material through which they pass.

The emergence of Shadow Zone

Earthquake waves get recorded in seismographs located at far off locations.

However, there exist some specific areas where the waves are not reported. Such a zone is called the ‘shadow zone’.

The study of different events reveals that for each earthquake, there exists an altogether different shadow zone.

It was observed that seismographs located at any distance within 105 ° from the epicenter, recorded the arrival of both P and S-waves.

However, the seismographs located beyond 145 ° from the epicenter, record the arrival of P-waves, but not that of S- waves.

Thus, a zone between ° 105 ° and 145 ° from the epicenter was identified as the shadow zone for h both the types of waves. The entire zone beyond 105 ° does not receive S-waves.

The shadow zone of S-waves is not only larger in extent but it is also a little over 40 percent of the earth’s surface. 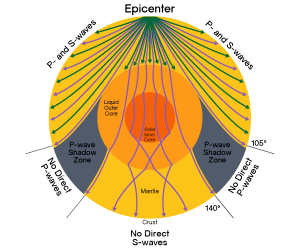 How these properties of ‘P’ and ‘S’ waves help in determining the earth’s interior?

The variations in the direction of waves are inferred with the help of their record on the seismograph.

By observing the changes in velocity, the density of the earth as a whole can be estimated.

By observing the changes in the direction of the waves (emergence of shadow zones), different layers can be identified.

Why S-waves cannot travel through liquids?

S-waves are shear waves, which move particles perpendicularly to their direction of propagation.

They can propagate through solid rocks because these rocks have enough shear strength.

The shear strength is one of the forces that hold the rock together, and prevent it from falling into pieces.

Liquids do not have the same shear strength: that is why, if you take a glass of water and suddenly remove the glass, the water will not keep its glass shape and will just flow away.

In fact, it is just a matter of rigidity: S-waves need a medium rigid enough to propagate. Hence, S-waves do not propagate through liquids.

Get exclusive UPSC Resources that I only share with Telegram subscribers.