In this article, I want to walk you through the Unification of Italy for UPSC, World History UPSC Notes.

Italian unification or the Risorgimento, meaning “the Resurgence” or “revival”, was the political and social movement that consolidated different states of the Italian peninsula into the single state of the Kingdom of Italy in the 19th century.

Role of Individuals in Unification of Italy

The process began in 1815 with the Congress of Vienna and was completed in 1871 when Rome became the capital of the Kingdom of Italy.

Unification of Italy was a two-step process. At first, it tried to gain independence from Austria. Secondly, it had to unite the independent Italian states into a single entity. Mazzini and Garibaldi were revolutionaries who played the most important role in this process.

For many centuries, Italy was nothing more than a geographical expression. It was a patchwork of small states jealous of one another. Never, since the days of the Roman Empire, was the Italian Peninsula been effectively united under one rule. Various attempts to bring the Italian Peninsula under one government had ended in failure. The division of Italy among the foreign dynasties was one of the chief hurdles in the path of the Italian unification. 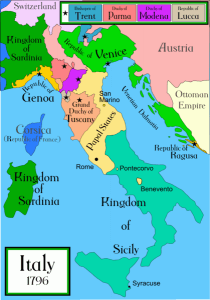 Austria had occupied the northern part of Italy. The Princes of the Hapsburg family of Austria ruled over the duchies of Parma, Modena, and Tuscany. In the south, the Kingdom of Sicily and Naples was under the Bourbon dynasty. It was on account of the division of Italy into many independent parts that Metternich referred to Italy as a geographical expression. 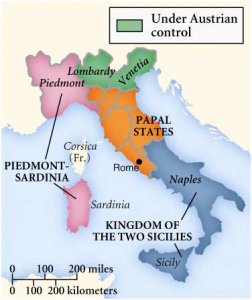 Central Italy was under the temporal authority of the Pope. Apart from the political division of the peninsula, the Italians themselves had not yet developed a full sense of national consciousness. Different regions and towns of Italy had developed their own distinct traditions which led to local jealousies which in turn checked national growth.

Historian and politician Metternich wrote that ‘In Italy, the provinces were against provinces, towns against towns, families against families and men against men’. 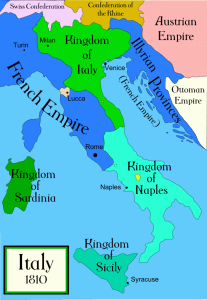 During the 1820s the Carbonari secret society tried to organize revolts in Palermo and Naples but with very little success, mainly because the Carbonari did not have the support of the peasants. Then came Giuseppe Mazzini, a patriotic writer who set up a national revolutionary movement known as Young Italy (1831). Mazzini was in favor of a united republic. His ideas spread quickly among large segments of the Italian population. Young Italy’s revolutionary cells formed throughout the Italian peninsula.

A new Pope, Pius IX, was elected in 1846 who promised reforms in the Papal States. Other Italian princes made some liberal reforms that were intended to weaken the revolutionary movements. But instead, these reforms were to bring about revolutions in 1848 in Sicily, Naples, Rome, Florence, Milan, Venice, and Turin.

The Revolutions of 1848 in Italy

The first revolt took place in the Kingdom of Sicily, which resulted in a constitution for the whole kingdom. A revolt in Rome forced Pope Pius IX to flee Rome and a republic was proclaimed. King Charles Albert of Sardinia mobilized his army and attacked Lombardy to drive the Austrians from Northern Italy.

It looked as if the independence and unity of Italy had become a possibility. But then the Austrians defeated the Piedmontese and Charles Albert had to abdicate. His son, Victor Emmanuel II succeeded him in 1849. A new revolutionary leader, Giuseppe Garibaldi, could not hold Rome against a French army, sent to restore the Pope in Rome. An Austrian army invaded Italy and suppressed the revolts in Venice and Milan. Only in Sardinia did Victor Emanual II held firm and kept a liberal constitutional government.

The country became a constitutional monarchy and many liberal reforms were introduced.

Through his diplomatic skills, he achieved the political unification of Italy in less than a decade. At the secret Pact of Plombieres, Cavour was able to persuade Emperor Napoleon III to a secretly planned war against Austria.

In elections held in 1859-1860, all the northern states voted in referenda to join the Kingdom of Sardinia. At this point, Napoleon III concluded a separate peace with Austria (Treaty of Villafranca) and left Cavour to continue to fight the war against Austria alone. Napoleon became concerned about the large size of the new Italian state close to the French border. Napoleon also insisted that Cavour had over the provinces of Savoy and Nice to France, as was agreed by the Pact of Plombieres. Napoleon left a French garrison to help the Pope stay in control of Rome.

Giuseppe Garibaldi (1807-82) was the other great Italian national hero. Garibaldi’s dream of a united Italian republic made him come out from his retirement on the island of Caprera.

In 1860 he sailed from Genoa with the Thousand Red Shirts (an army of patriotic volunteers) and freed Sicily and Naples from the Bourbon King Francis II. Garibaldi met Victor Emmanuel at a secret meeting and gave these two kingdoms the King to avoid a possible civil war between royalist and republican patriots.

The first Italian Parliament met in 1861 and declared Victor Emmanuel as the first king of a united Italy. But the new Italian Kingdom was still without Rome, (still ruled by the Pope) and Venetia (still controlled by the Austrians).

Venetia was added to Italy in 1866 when Prussia defeated Austria in the Seven Weeks’ war. In that war Italy sided with Prussia and Venetia was its reward. When the Franco-Prussian War broke out in 1870, Napoleon III had to withdraw his troops from Rome. The Italian government sent troops at once to take over Rome from the Pope. The citizens of Rome voted for union with Italy which was declared the new capital city of Italy in 1871.

Q. What was the impact of the 1830 Revolution on the Italian Unification Movement?

Q. What was the role of Mazzini in Italian Unification?

Q. What was the role of Cavour in Italian Unification?

Q. What was the role of Garibaldi in Italian Unification?