In this article, I want to walk you through Levels of organization in ecology.

Levels of organization in ecology

Ecology is a science that studies the interdependent, mutually reactive and interconnected relationship between the organisms and their physical environment on the one hand and among the organisms on the other hand.


The main levels of organization in ecology are six and are as follows. 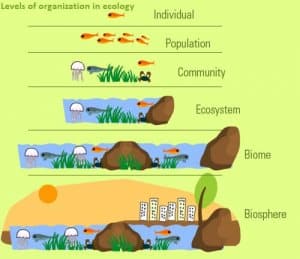 The organism is an individual living being that has the ability to act or function independently. It may be a plant, animal, bacterium, fungi, etc.

A population is a group of organisms usually of the same species, occupying a defined area during a specific time.

The main limiting factors for the growth of a population are abiotic and biotic components.

In ecology, the term community, or more appropriately ‘biotic community, refers to the populations of different kinds of organisms living together and sharing the same habitat.

For example, it is the climate of the area which determines whether a given area becomes a desert or a forest.

Man-made communities are very unstable and require a great deal of care and constant manipulation and maintenance.

On the basis of size and degree of relative independence communities may be divided into two types:

These are large-sized, well organized and relatively independent. They depend only on the
sun’s energy from outside and are independent of the inputs and outputs from adjacent
communities.

These are dependent on neighboring communities and are often called societies. They are secondary aggregations within a major community and are not therefore completely independent units as far as energy and nutrient dynamics are concerned.
Example: A mat of lichen on a cow dung pad.

An ecosystem is defined as a structural and functional unit of biosphere consisting of a community of living beings and the physical environment, both interacting and exchanging materials between them.

The term ‘ecosystem ‘was coined by A.G. Tansley in 1935. An ecosystem is a functional unit of nature encompassing complex interaction between its biotic (living) and abiotic (nonliving) components. For example- a pond is a good example of an ecosystem.

Ecosystems vary greatly in size and elements, but each is a functioning unit of nature. Everything that lives in an ecosystem· is dependent on the other species and elements that are also part of that ecological community. If one part of an ecosystem is damaged or disappears, it has an impact on everything else. The ecosystem can be as small as a single tree or as large as the entire forest.

Components of an Ecosystem

They are broadly grouped into:

The abiotic component can be grouped into the following three categories:


Functions of an Ecosystem

Ecosystems are complex dynamic systems. They perform certain functions. These are:

Ponds, lakes, meadows, marshlands, grasslands, deserts and forests are examples of the natural ecosystems. Many of you have seen an aquarium; a garden or a lawn etc. in your neighborhood. These are a man-made ecosystem.

Ecosystems are classified as follows:

Productivity in ecosystems is of two kinds, i.e., primary and secondary.

Green plants fix solar energy and accumulate it in organic forms as chemical energy. As this is the first and
the basic form of energy storage, the rate at which the energy accumulates in the green plants or producers is known as primary productivity.

Productivity is a rate function and is expressed in terms of dry matter produced or energy captured per unit area of land, per unit time.

It is more often expressed as energy in calories/cm2/yr or dry organic matter in g/m2/yr (g/m2 x 8.92 = lb/acre). Hence, the productivity of different ecosystems can be easily compared.

The total solar energy trapped in the food material by photosynthesis is referred to as gross primary productivity (GPP).

The rates at which the heterotrophic organisms re-synthesize the energy-yielding substances are called secondary productivity. Here, the net primary productivity (NPP) results in the accumulation of plant biomass, which serves the food of herbivores and decomposers.

While in temperate regions, primary productivity is limited by the cold climate and a short snow-free growing period during the year.

Goods and Services provided by ecosystems include:

Threats to Ecological Goods and Services-

Because of their importance, it is extremely important to reduce the threat of irreversible damage to our ecological systems caused by:

Ecotone is a zone of the junction between two or more diverse ecosystems e.g. the mangrove forests. They represent an ecotone between marine and terrestrial ecosystems. Some more examples of ecotone are grassland, estuary, and riverbank.

In nature, many species occupy the same habitat, but they perform different functions. The functional characteristic of a species in its habitat is referred to as “niche” in that common habitat. Habitat of a species is like its ‘address’ (i.e. where it lives) whereas niche can be thought of as its “profession” (i.e. activities and responses specific to the species).

The term niche means the sum of all the activities and relationships of a species by which it uses the resources in its habitat for its survival and reproduction.

A niche is the unique functional role or place of a species in an ecosystem.

The terrestrial part of the biosphere is divisible into enormous regions called biomes, which are characterized, by climate, vegetation, animal life, and general Soil type.

No two biomes are alike. The climate determines the boundaries of the biome and abundance of plants and animals found in each one of them. The most important climatic factors are temperature and precipitation.

Aquatic systems are not called biomes; however, they are divided into distinct life zones, with regions of relatively distinct plant and animal life. The major differences between the various aquatic zones are due to salinity, levels of dissolved nutrients; water temperature, depth of sunlight penetration.

The biosphere is a part of the earth where life can exist. The biosphere represents a highly integrated and interacting zone comprising of the atmosphere (air), hydrosphere (water) and lithosphere (land).

It is a narrow layer around the surface of the earth. If we visualize the earth to be the size of an apple the biosphere would be as thick as its skin.

The biosphere is absent at extremes of the North and South poles, the highest mountains and the deepest oceans since existing hostile conditions there do not support life. Occasionally spores of fungi and bacteria do occur at a great height beyond 8,000 meters, but they are not metabolically active, and hence represent only dormant life.

Living organisms are not uniformly distributed throughout the biosphere. Only a few organisms live in the Polar Regions, while the tropical rain forests have an exceedingly rich diversity of plants and animals.